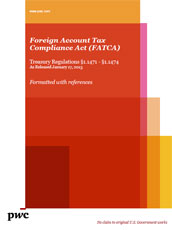 Stakeholders patiently waiting for guidance regarding the Foreign Account Tax Compliance Act (FATCA) need not wait any longer – final regulations were issued along with a press release on January 17, 2013. FATCA was enacted as part of the Hiring Incentives to Restore Employment Act (HIRE Act) on March 18, 2010 to serve as an administrative tool to prevent and detect US tax evasion and improve taxpayer compliance. As a result, chapter 4 (Sections 1471 – 1474) was added to Subtitle A of the Internal Revenue Code.

The final regulations contain over 500 pages of guidance that will undoubtedly consume a significant amount of time as stakeholders including banks, investment funds, insurance companies, and their clients, study their content. The length of these regulations is not surprising given that FATCA’s statutory provisions were intentionally broad and gave considerable discretion to the US Department of the Treasury (US Treasury) and the Internal Revenue Service (IRS) to narrow its scope when promulgating regulations.

The final regulations follow last February’s release of the proposed regulations. The government received hundreds of comment letters and held meetings with different stakeholders both inside and outside the financial services industry. The issuance of the final regulations also follows the conclusion of negotiations of several intergovernmental agreements (IGAs) between the US Treasury and various foreign governments addressing FATCA implementation.

This Newsalert describes at a high level some of the notable distinctions between the proposed and final regulations as well as some essential and necessary actions for stakeholders to consider. PwC will issue additional Newsalerts that will contain more detailed analyses.

A link to the registration site will be open on Tuesday, January 22, 2013, and can be found at www.meet.pwc.com.

Do the final regulations meet expectations?

The final regulations appear to utilize the basic structure of the proposed regulations and include over a hundred pages of new policy statements and rules. This added guidance addresses stakeholder and industry comments, which generally focused on cost and burdens, legal impediments, and the technical requirements. The preamble to the final regulations describes the government’s response to industry comments and affirms the government’s belief that its approach achieves a balance between fulfilling policy objectives while minimizing burdens.

To achieve this balance, the government states that it focused on eliminating unnecessary burdens, simplifying processes, leveraging existing practices, and minimizing operational costs to make FATCA implementation a more manageable exercise. The preamble also references a ‘risk-based approach,’ which more closely aligns with the anti-money-laundering (AML)/know your customer risk-based approach. And, as expected, the overarching approach by the government is for the regulations to more closely coordinate IGA concepts, thereby fostering international cooperation and collaboration among governments.

From an overall perspective, it appears that many stakeholder comments influenced the regulations (see below for more details).

What are some notable distinctions between the final and proposed regulations?

Although not an exhaustive list, the following are some of the most notable and significant differences between the proposed and final regulations:

Local FFIs. Several modifications and clarifications were made in the final regulations in response to industry comments, such as clarifying the activities that would not prevent an entity from qualifying as a local FFI and expanding the type of entities that qualify for such status.

Owner-documented FFIs. Owner-documented FFIs will no longer be prohibited from issuing debt interests that constitute financial accounts in excess of $50,000 to persons other than non-participating FFIs. This assumes that the owner-documented FFI reports all individuals and specified US persons that directly or indirectly hold such interests (other than persons that hold such interests through a participating FFI, registered deemed-compliant FFI, certified deemed-compliant FFI, US person, exempt beneficial owner or excepted NFFE) to the designated withholding agent.

The use of government-issued identification is also broadly permitted for identifying individuals whether issued by the government, an agency or a municipality. In another response to industry comments, the final regulations specifically point out that third-party credit agency information may be utilized for identifying an individual or entity’s FATCA status.

In addition, withholding agents will be given six months after the effective date of any new Section 871(m) regulations to perform the required withholding on dividend equivalent payments subject to those new rules. A similar rule applies for foreign passthru payments.

The final regulations also provide clarification for how a withholding agent determines if a grandfathered obligation is materially modified. A withholding agent may, absent actual knowledge, rely on a written statement by the issuer of the obligation.

requirements for verifying compliance with the FFI agreement

procedural requirements for participating FFIs that are legally prohibited from reporting or withholding as required under the FFI agreement.

Future guidance. The US Treasury expects to publish a future revenue procedure setting out the terms of an FFI agreement, which will be consistent with the final regulations. It is also expected to address issues related to the coordination of an FFI’s obligations under chapter 3 and the provisions of any applicable IGA. In addition, it is expected to include administrative provisions such as those related to termination, renewal and modification of the agreement.

Registration portal. The FATCA registration portal (the Portal) will be the primary means for FFIs to interact with the IRS. They will be able to complete and maintain their chapter 4 registrations, agreements and certifications. The Portal is expected to be accessible on-line to FFIs no later than July 15, 2013. Key points and milestones regarding the Portal are as follows:

FFIs will be able to agree to comply with their obligations as participating FFIs or sponsoring entities.

The IRS will permit registration of FFIs that are described as a ‘Reporting Financial Institution’ under a Model 2 IGA so long as the associated jurisdiction is identified on an IRS published list of countries treated as having an IGA in effect even if ratification has not been completed.

The IRS intends to issue a Global Intermediary Identification Number (GIIN) to FFIs whose registration is approved. GIINs will be assigned no later than October 15, 2013.

An FFI will use its GIIN for satisfying its reporting obligations and to identify its status to withholding agents.

The IRS will electronically post the first list of participating FFIs and registered deemed-compliant FFIs (including Model 1 FFIs) on December 2, 2013 and intends to update this list monthly. An FFI must register with the IRS by October 25, 2013 in order to be included on the December 2013 list.

New certification of compliance. Under the final regulations, a responsible officer of a participating FFI is required to periodically certify to the IRS that the FFI is in compliance with the requirements of the FFI agreement. This certification is required once every three years. In addition, the responsible officer is required to certify to the IRS that it maintains effective internal controls and that there were no material failures during the certification period, or that any material failures that did occur were corrected.

Time and manner of making certifications. The final regulations provide that responsible officer due diligence certifications will be made electronically through the Portal no later than 60 days following the date that is two years after the effective date of the FFI agreement.

FATCA remains one of the most ambitious, comprehensive and complex information reporting regimes in the world. The final regulations provide many of the needed details and clarifications regarding customer on-boarding, customer due diligence, account opening, documentation, registration as well as tax reporting and withholding. The US Treasury and IRS have outlined and appear to have followed a policy approach using the guideposts of a risk-based approach, collaborations with non-US governments as well as simplification. With that in mind, favourable changes have been made, for example, to increase the time available for reviewing existing accounts, expand the use of existing documentation and defer the application of FATCA for certain existing obligations.

So what is the effect on your company? Stakeholders and their clients will need to take some time to fully comprehend the impact of the over 500 pages of policy statements and rules in the final regulations. The story is still unfolding especially with the level of cooperation and implementation details from foreign governments that are expected to implement IGAs. The next step is that planning and solutions put in place based on the proposed regulations should be reviewed and updated in line with the new final rules.

Plans to modify or replace operational processes and information technology systems will also need updating. As part of this effort, companies should also broadly quantify their compliance costs considering the simplifications within the new regulations. Do the simplifications substantially improve the bottom line compliance costs? How may the new regulations mitigate an expected drain on resources?