On the 31st of January 2020, after a two-day meeting held on 29 – 30 January, the OECD/G20 Inclusive Framework on BEPS issued a statement that updates the state-of-play regarding the work on tax challenges arising from the digitalization of the economy, and sets forth a revised work program on the Two-Pillar Approach. In this statement, the Inclusive Framework (137 jurisdictions) endorses the ‘Unified Approach’, which sets out revised profit allocation/nexus rules in the context of Pillar 1, and is committed to reach an agreement on this within 2020. In addition, the statement also issues an update on the progress of work on the Global Anti-Base Erosion Proposal (‘GloBE’ or ‘Pillar 2’) proposal.

The Inclusive Framework is more outspoken on the scope/nexus and thresholds applicable to Amount A, which would allocate a share of residual profit to market jurisdictions using a formulaic approach (hence outside the arm’s length principle) applied at an MNE group (or business line) level. The scope of Amount A will be focused on automated digital services (including a.o. online search engines, social media platforms, online intermediation platforms, streaming platforms, online gaming, cloud computing and online advertising) and consumer-facing businesses (including but not limited to personal computing products, clothes, branded foods, automobiles, and franchising licensing arrangements). Thresholds for the businesses in scope of Amount A will consider a.o. an overall group gross revenue threshold, with additional limits based on aggregate in-scope revenues and a de minimis threshold. As Amount A will feature a formula-based allocation mechanism – looking at a portion of deemed residual profits – but with still  many technical issues to resolve, including the use of business line/regional segmentation.

Noteworthy is that Amount B is likely to have an impact on a lot more businesses since the scope and limitations that will apply for Amount A (e.g. consumer-facing and revenue thresholds) will not apply for Amount B. Amount B – which is said to remain within the arm’s length principle – allocates a fixed remuneration for defined baseline distribution and marketing functions that take place in the market jurisdiction (e.g. limited risk distributors). The statement notes that the fixed return will need to account for regional, industry, and functionality differences.

The return under Amount C covers any additional profit where in-country functions exceed the baseline activity compensated under Amount B. The OECD does not see any (significant) interaction between Amount A and Amount B, but recognizes that instances of double counting might arise if there is an overlap between Amounts A and C.

The Progress Note on Pillar 2 indicates that technical work is underway, although the note provides few details. Work continues on policy and design issues, such as the use of financial accounts (and dealing with temporary differences), blending options (i.e. jurisdictional vs. global blending), carve-outs, and coordination between the income inclusion and undertaxed payments rules. The minimum rate has not yet been discussed.

The OECD has been carrying out an economic analysis and impact assessment of the Pillar 1 (amount A) and Pillar 2 proposals, which was clarified during an OECD webcast on 13 February 2020. The OECD based its analysis on firm-level data combined with aggregate data (such as country-by-country reporting data) and took into account a broad geographic and company coverage (i.e. more than 200 jurisdictions and 27.000 multinational enterprise (MNE) groups). Based on their analysis, the OECD expects that the combined effect of Pillars 1 and 2 would lead to a significant increase in global tax revenues, i.e. an estimated global net revenue gain up to 4% of global Corporate Income Tax revenues or USD 100 billion per year (depending on future design decisions), with similar revenue gains across high, middle and low-income economies. Furthermore, the reforms are expected to lead to a significant reduction in profit shifting. Effective Tax Rate (ETR) impact is expected to be higher for MNE’s headquartered in investment hubs. Finally, the OECD’s calculations demonstrate that the potential impact of Pillar 2 would be more significant than for Pillar 1 (as indicated in the graph below). 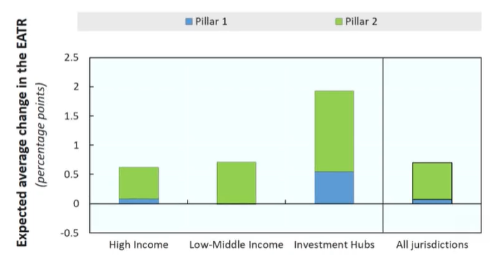 Rather than macro-economic impact however, many businesses are concerned about the impact these new rules may have on their ETR and sustainability of their business models. Our PwC tax specialists can help taxpayers assess the potential qualitative and quantitative impact of the envisaged new rules in view of ensuring the sustainability of their broader tax and organisational model. PwC developed a tool that enables you to assess the impact on your business with easily available data. It is recommended for taxpayers to perform such assessment rather sooner than later in order to be well-prepared by the time these changes impact their business. Indeed, there is an ambition that the Inclusive Framework will be able to sign off on a complete political agreement covering Pillars 1 and 2 at the beginning of July, allowing the OECD to deliver a report to the G20 Leaders at their November 2020 meeting.

For an in-depth discussion of how this might affect your business, please get in touch with us.