A ten minutes tour of:

Earlier today, the OECD published the long awaited Global Anti-Base Erosion Model Rules (Pillar Two) agreed upon by the Inclusive Framework on BEPS. These rules should facilitate the implementation of a minimum effective taxation of 15% on a per country level for multinational groups with consolidated revenues exceeding EUR 750 million. They include the design of the income inclusion rule (IIR), the undertaxed payment rule (UTPR) and the substance-based income exclusion.

With this publication just prior to the imminent launch of the European Commission Pillar 2 Directive (expected 22 December), there is little time to waste for business to get its arms around the features of what safely can be called a major overhaul in the international tax architecture.

The GloBE Model rules form part of the Two-Pillar solution to address the tax challenges arising from the digitalisation of the economy. On Pillar 1 (the allocation of a piece of excess profits over user countries) further communications are expected in 2022, which will be addressed in a separate newsflash.

Who is in scope?

The GloBE rules will apply to MNEs that meet the EUR 750 million revenue threshold in at least two of the four fiscal years immediately preceding the tested fiscal year.

What are the mechanics?

Pillar 2 covers the Model rules to allow for a minimum effective tax rate (on a jurisdictional basis) at  15% through two interlocking local rules, i.e., the GloBE rules:

Today’s communication does not contain any (further) guidance on the final design of the subject to tax rule (STTR). This will allow source countries to impose taxation limited to the difference between the minimum rate (9%) and the rate on the intercompany payment. The application of the STTR requires changes to bilateral tax treaties. A treaty-provision for the STTR is expected by mid 2022.

To determine the top up tax to be paid, the GloBE rules refer to an effective tax rate (ETR), calculated on a jurisdictional basis. The ETR for each country is equal to (i) the sum of the GloBE taxes  of each entity (excl. investment entities) located in the jurisdiction, divided by (ii) the Net GloBE Income of the jurisdiction for the fiscal year. Permanent Establishments also qualify as entity.

The GloBE taxes and Net GloBE Income start from the financial accounting figures used for consolidation purposes per entity, including agreed adjustments. International shipping income is excluded. It is important to note that besides the current tax expense, deferred taxes will also have to be taken into account subject to certain conditions.

If the jurisdictional ETR is below 15%, top-up tax will in principle be due with respect to the Net GloBE Income of that jurisdiction. To determine the amount of top-up tax, amongst others the substance based income exclusion, the de minimis profit exclusion and a potential domestic top –up tax must be taken into account.

In addition, a de minimis profit exclusion rule will be provided and no top-up tax will be due for jurisdictions where, averaging current and two prior years, the GloBE revenue is less than EUR 10 million and GloBE Income (or Loss) is less than EUR 1 million.

The UTPR will not apply to MNEs in the initial phase of their international activity. For the Model Rules purposes, ‘start-up’ MNEs are operating in no more than six jurisdictions and have a maximum of EUR 50 million tangible assets abroad. This exclusion is limited to a period of 5 years after the MNE comes into the scope of the GloBE rules for the first time. For those MNEs that are in scope of the GloBE rules when the UTPR rules enter into effect, the period of 5 years will start when the UTPR rules come into effect.

No final agreement is reached on the scope of the safe harbours. Further guidance is expected in this regard in 2022 in the Implementation Framework.

Summary of the calculation of the top-up tax 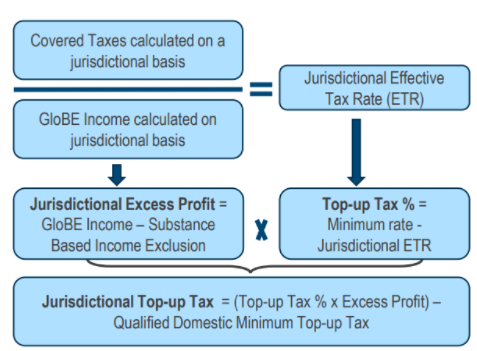 When and how will the rules come into effect / next steps

Next on the OECD/G20 agenda is the publication of the Commentary to the GloBE Rules, which will be released early 2022 to provide additional guidance on the interpretation of the Model Rules. In February and March 2022 respectively, public consultations will be organised on the Implementation Framework (to facilitate the coordination and administration of the new rules, including safe harbours) and the STTR. The conditions for co-existence of these rules with the US minimum tax rules (GILTI) are equally expected for February 2022.

The expected timeline is that Pillar Two should be transposed into law over the course of 2022, so as to be effective in 2023, with the UTPR coming into effect in 2024. With respect to the STTR and its commentary, a treaty provision will be developed by mid 2022. Further, a multilateral instrument will be developed by mid 2022 to organize a swift and consistent transfer of the STTR into the bilateral treaties.

Your call for action as a company

Modeling will be crucial to understand the financial impact, in particular because certain elements of the GloBE Income calculation are left at the discretion of the taxpayer. The election of a certain position can have important financial consequences.

Compliance and data gathering will be pivotal as well. The calculation of the jurisdictional ETR is a burdensome task requiring input data that is not always readily available. Even if no top-up tax is due, the implementation of the GloBE rules may bring specific compliance challenges.

Our dedicated team has things at its fingertips and is ready to assist.